I'll call him Chris. He was a soccer player in high school. He was a transferee (as I recall), from one of the provincial 'branches' of the school. Academically, nothing impressive. He belonged to another section of the batch. You wouldn't have noticed him right off. But if you looked closer, behind the glasses and the (sometimes) untidy uniform coming from playing lunch soccer games, he is actually quite handsome.

It happened during third year high school. This was the time that the batch 'transformed' to being quite accepting of relationships with the gay batch mates.

(for a more comprehensive take on this, see this post.)

As far as I remember, I was the first among the beki barkada Chris approached. I cannot even recall the first encounter. I'm now wondering how our paths could have crossed: different sections, different social groups. But it happened. He started taking an interest in me, talking to me after class, getting my phone number, going out on dates (Saturday afternoons).

I was enamored. He was handsome, athletic. He had the build, naturally broad-shouldered, tapered hips, strong and muscular thighs and legs. He was good-natured, too. And the beki barkada found him attractive, too. Peer approval. actually Peer envy. The best reason. LOL

We became an item. I do have memories of Saturday afternoon with him at his house, in his parent's bedroom, listening to popular jazz (popular then) and canoodling, tickling. One particular time, I actually fell off the bed. And he peered from the edge, looked at me, with his mischievous smile and disheveled hair. He was so gorgeous that picture is stuck in my mind.

Faintly, I remember it wasn't perfect either. There were tampuhans. Maybe too many. Soon enough, we called it quits. Maybe I did. I can't recall. But what I do remember was that it was not a good break-up. We stopped talking. I think he was the last boyfriend I had in high school.

Chris went on to have relationships with other bekis. One was from this lower batch. Then eventually, with two of my close friends from the barkada, in succession. I don't know who came first: was it Nathan or Romee? One of that carried over to college, I am guessing. But both didn't last too long. The peculiar thing is that both Nathan and Romee were so into him that years after their relationships, they were still pining for him. Romee had it worse. Decades after, he would still be talking about him and what transpired even as Chris continued on as a straight man, married, with family.

Fast forward to present-day. We have all gotten over Chris. But we still fondly recall the euphoria of our joyous high school days, and Chris would always be part of the conversation. Social media brought us back to being in touch with our straight batch mates. Romee would become the beki most immersed in batch alumni activities.

One time, he told us that Chris found his way into the batch' FB page. He started adding up class mates, including Nathan and Romee. Based abroad, with wife and kids, he was stable, actually successful. He was eager to keep in touch with Romee and Nathan.

At the start of the year, he came home to celebrate his silver wedding anniversary in a grand way. He made sure he invited Romee and Nathan. We were all curious about how they would be introduced to the other guests. But beyond that, we all have been curious how all of our straight classmates feel now about what happened during high school. How did they 'rationalize' the relationships they had with us? Did it lessen their 'masculinity'? Or were they in denial of it? The presence of Nathan and Romee at the wedding was going to answer some of those questions, hopefully.

I must hand it to Chris. He treated both of them specially. He made sure that there would be a catch-up dinner for the three of them before the wedding. According to Nathan, Chris was so genuinely happy to see them. And there was no denial of the past. He talked about what transpired in the past so naturally. But more importantly, he was just happy to be in touch and to know what was happening in their lives.

During the wedding reception, he was introducing them as his ex boyfriends. Seriously. He would tell his wife and son, his relatives that he had a gay past "nung naging bakla ako". It would actually be said in jest. People would laugh. I guess there was some incredulity in the story because Romee and Nathan were not exactly straight-acting. Actually, far from it. But nobody asked questions. My friends didn't feel uncomfortable either. Chris made sure of that. He also touched base with some other bekis from the barkada. Well, except me.

I don't know if he still carries a grudge. Or because I use a different handle as my personal FB account and made it hard to find. I have seen his FB profile appear on my page for a while. I even checked it out to see how he looks. He looks his age. But you could still discern some handsomeness somewhere.

I've held out in trying to be the first to add him. A part of me wants him to do it first and another part is actually scared that he might even reject me as an FB friend #pridechicken. So I'm still weighing things.

Chris, many years after, has proven why three of us were smitten by him. He has shown that he really is a wonderful guy, so comfortable and relaxed and cool about high school life. He would always be a highlight of that part of my life.

I was back in Baguio City last week for work. I had a whole morning and afternoon to myself. So I tried to be spontaneous and checked out some 4square suggestions.

I had breakfast at 50's Diner along Leonard Wood. I was here years back with a date. Hihihi. The place remains stuck in time. And so is the menu. Haha. The food I got is nothing to rave about (Pancake sandwich) but I had it 'deconstructed' so it was served as pancakes with sidings. hehe.

Then I made the mistake of deciding to go to the BenCab Museum after. Yes, a mistake because Asin Road is under major repair. There was like 500 meters of rough road. I feared for the belly of my lowered car. Expert chauffeur managed to navigate with minimal grating.

I must say, though, that the museum was so worth it, starting with the place itself. The modernist building looks over a valley. 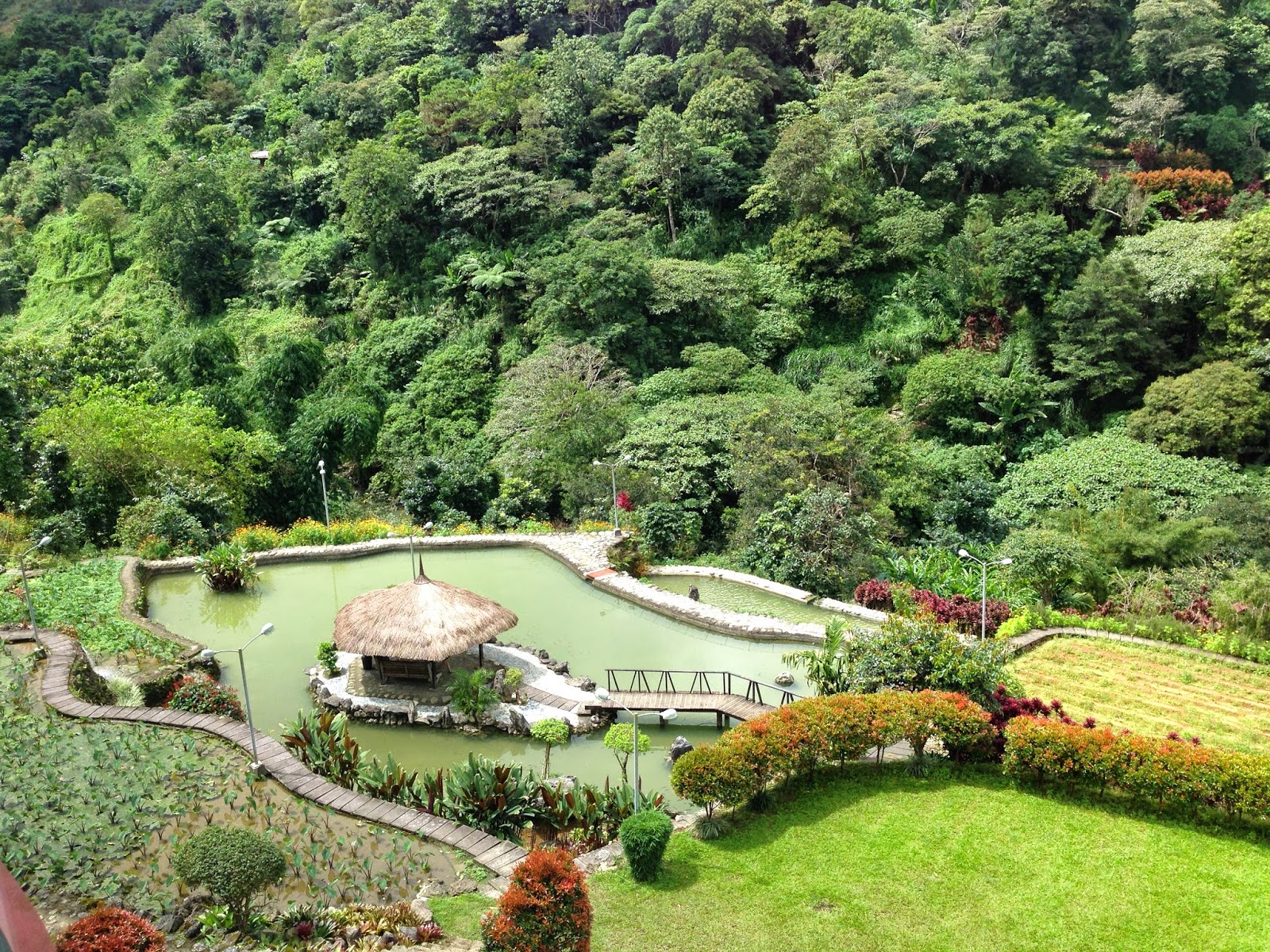 The sight of the luscious foliage was already inspiring. 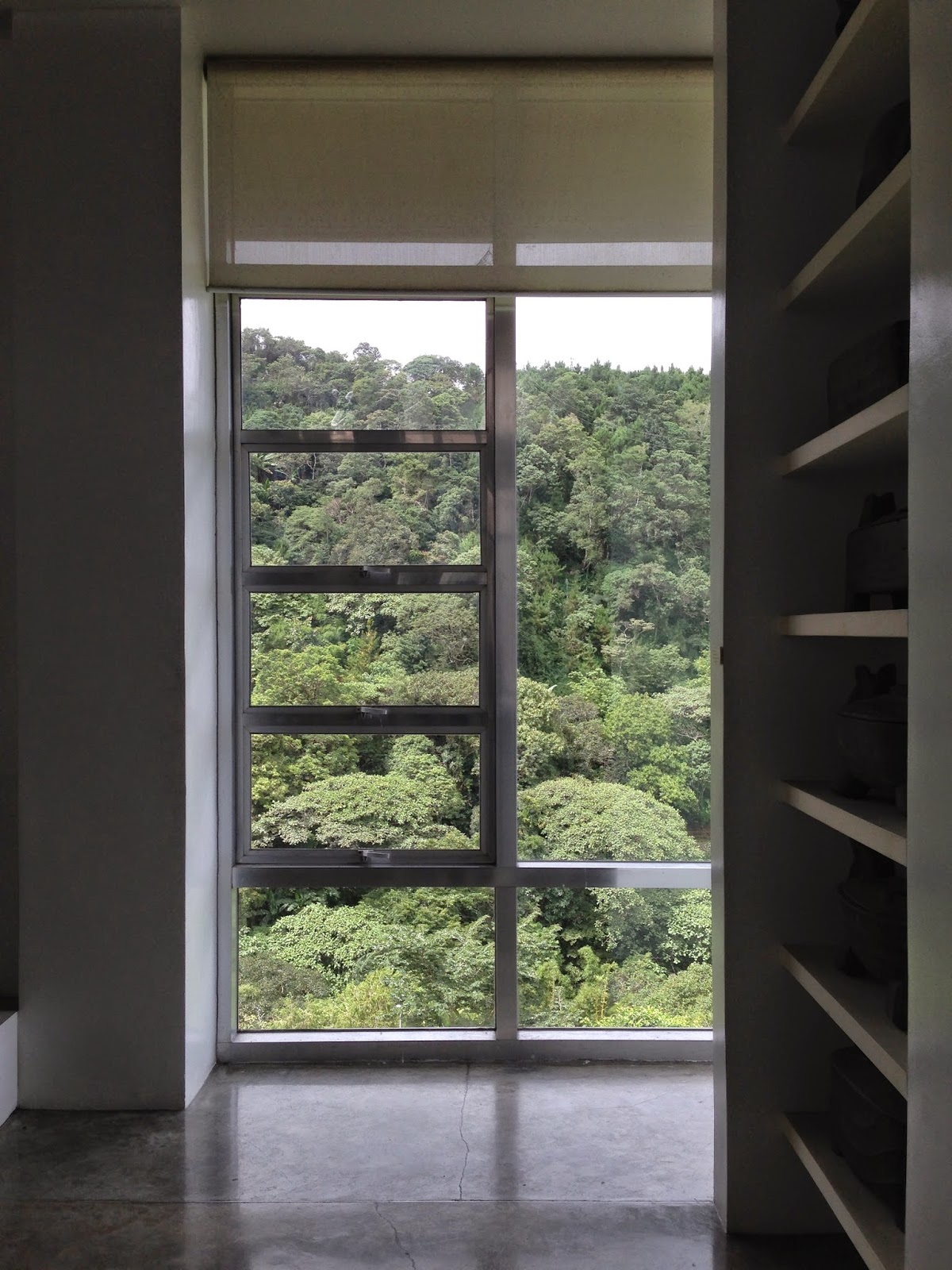 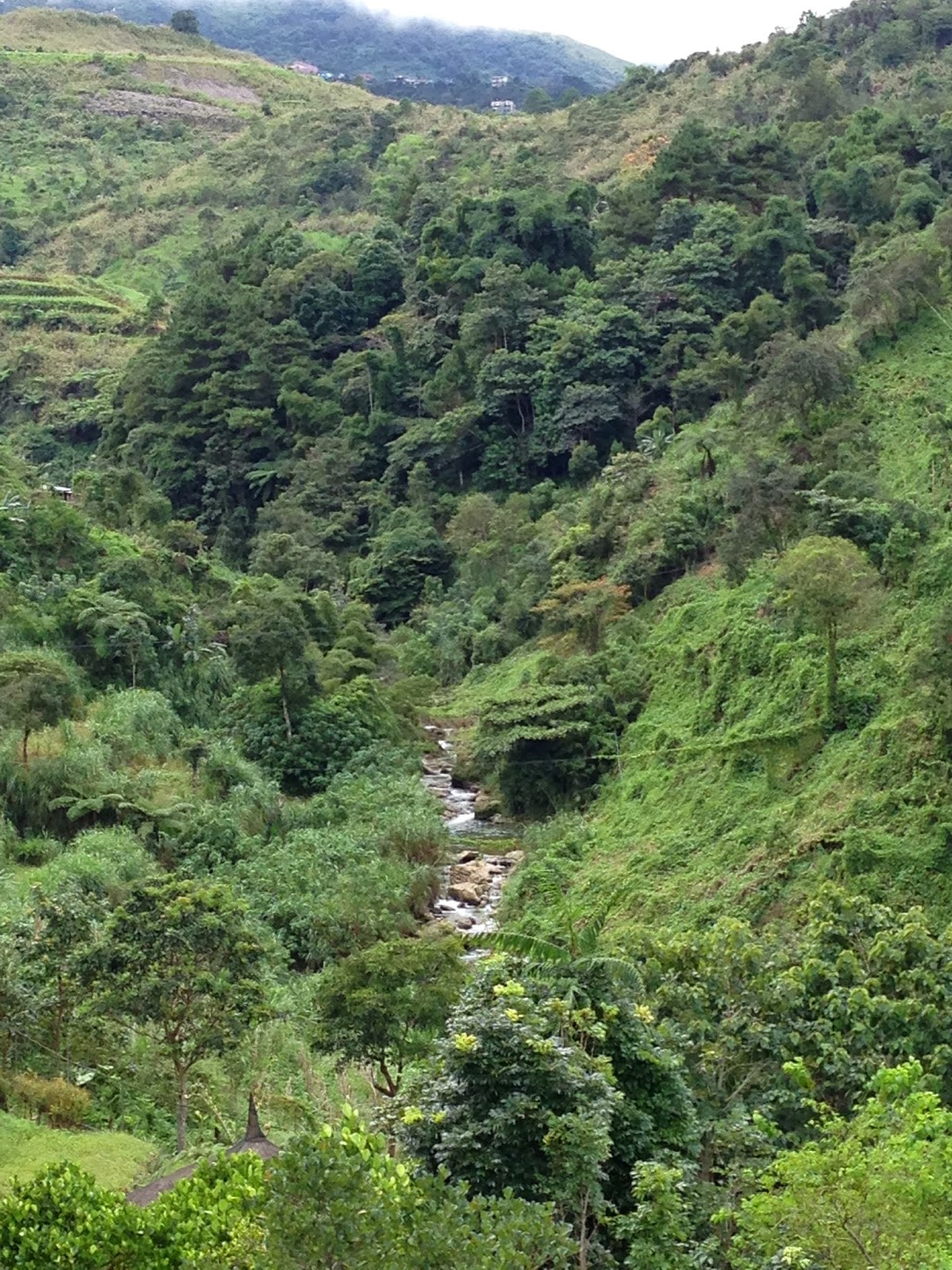 The art on display blew me away. Though I am no art critic, BenCab's own works just moved me. I love his palette choices. To my untrained eye, his works didn't seem to come from one person. 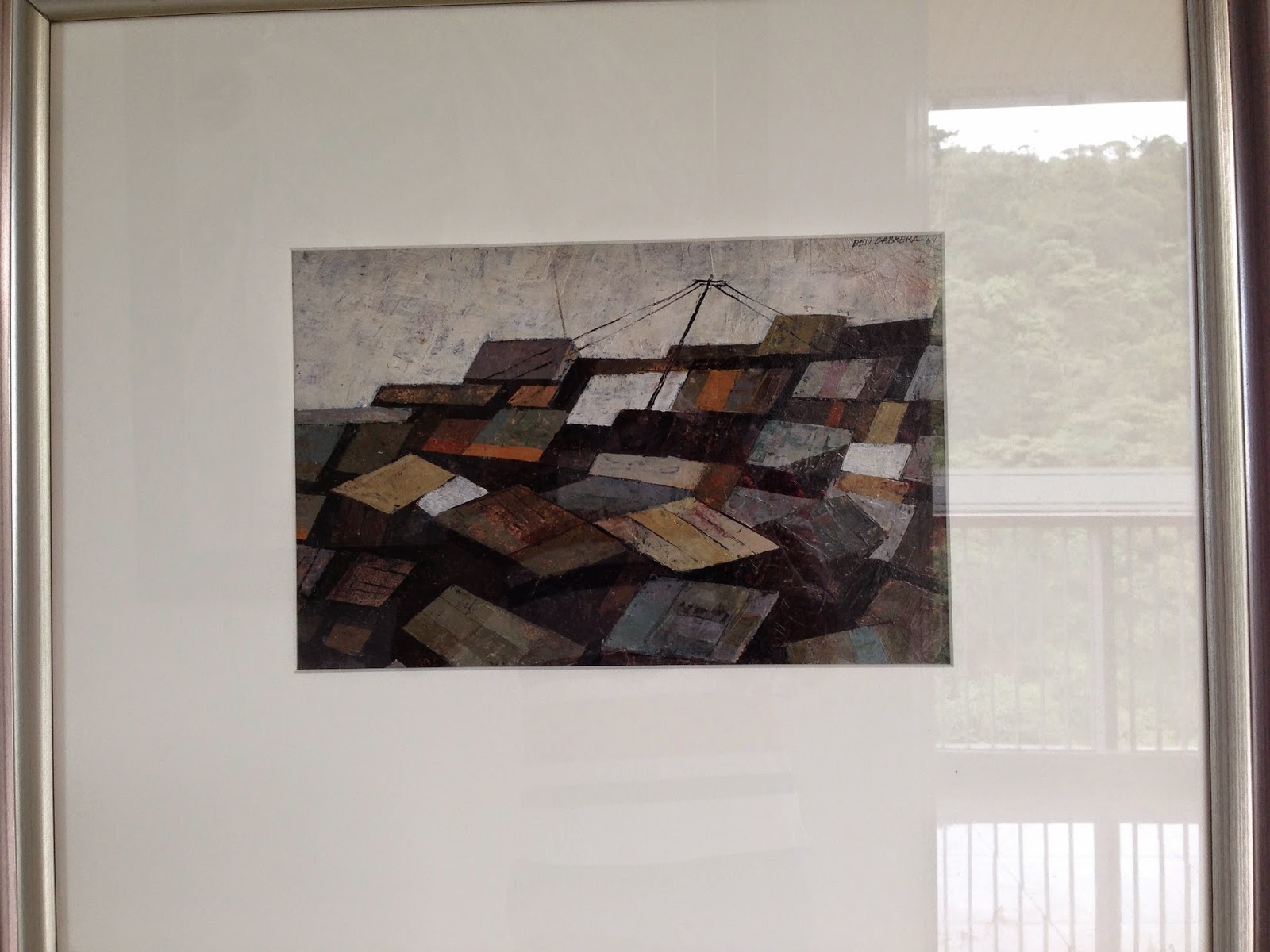 See how those yero rooftops take on beauty in geometry. 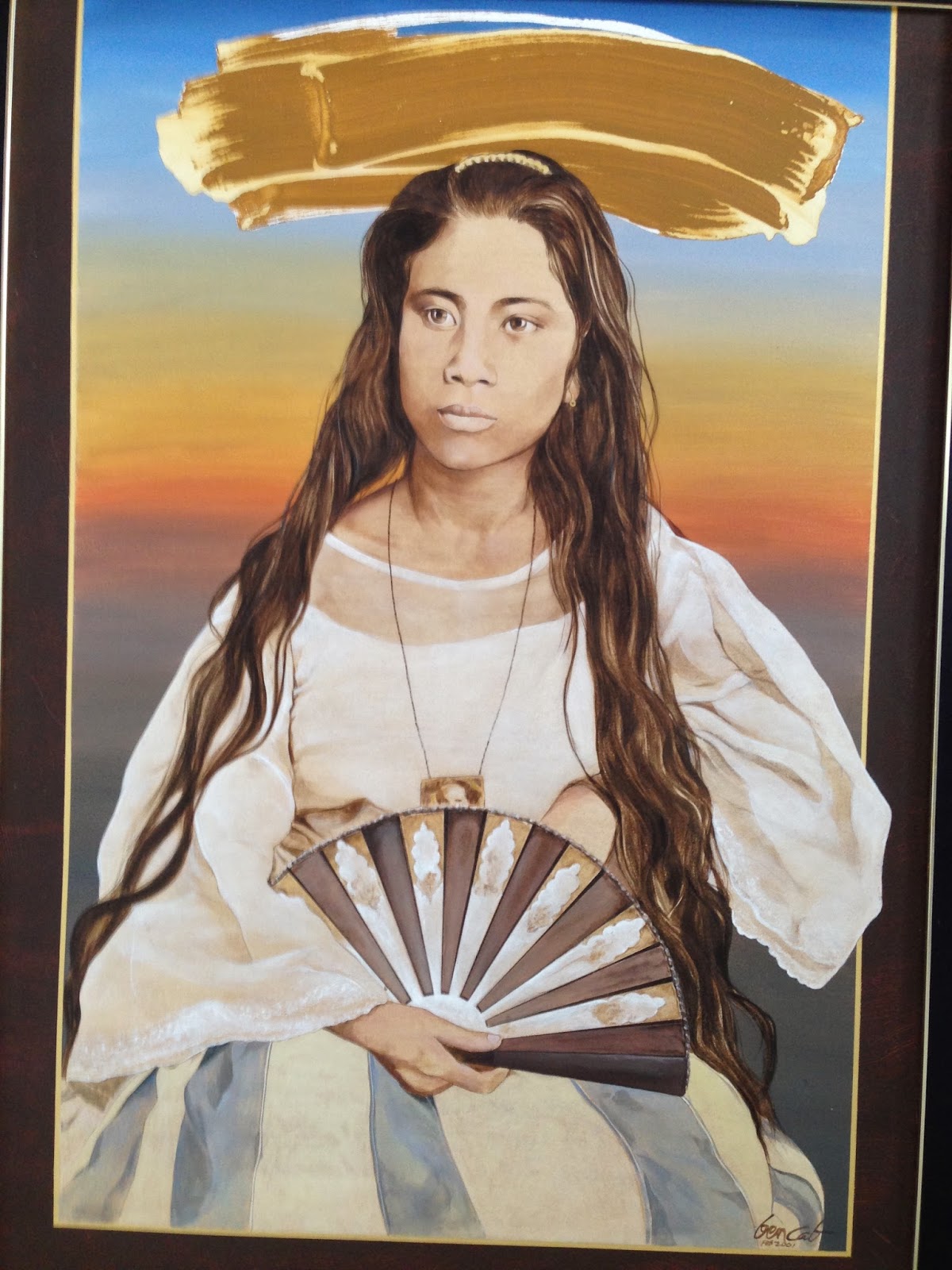 She is not the famous Sabel, BenCab's muse. I love that expression on her. "I am not here. I am somewhere else." 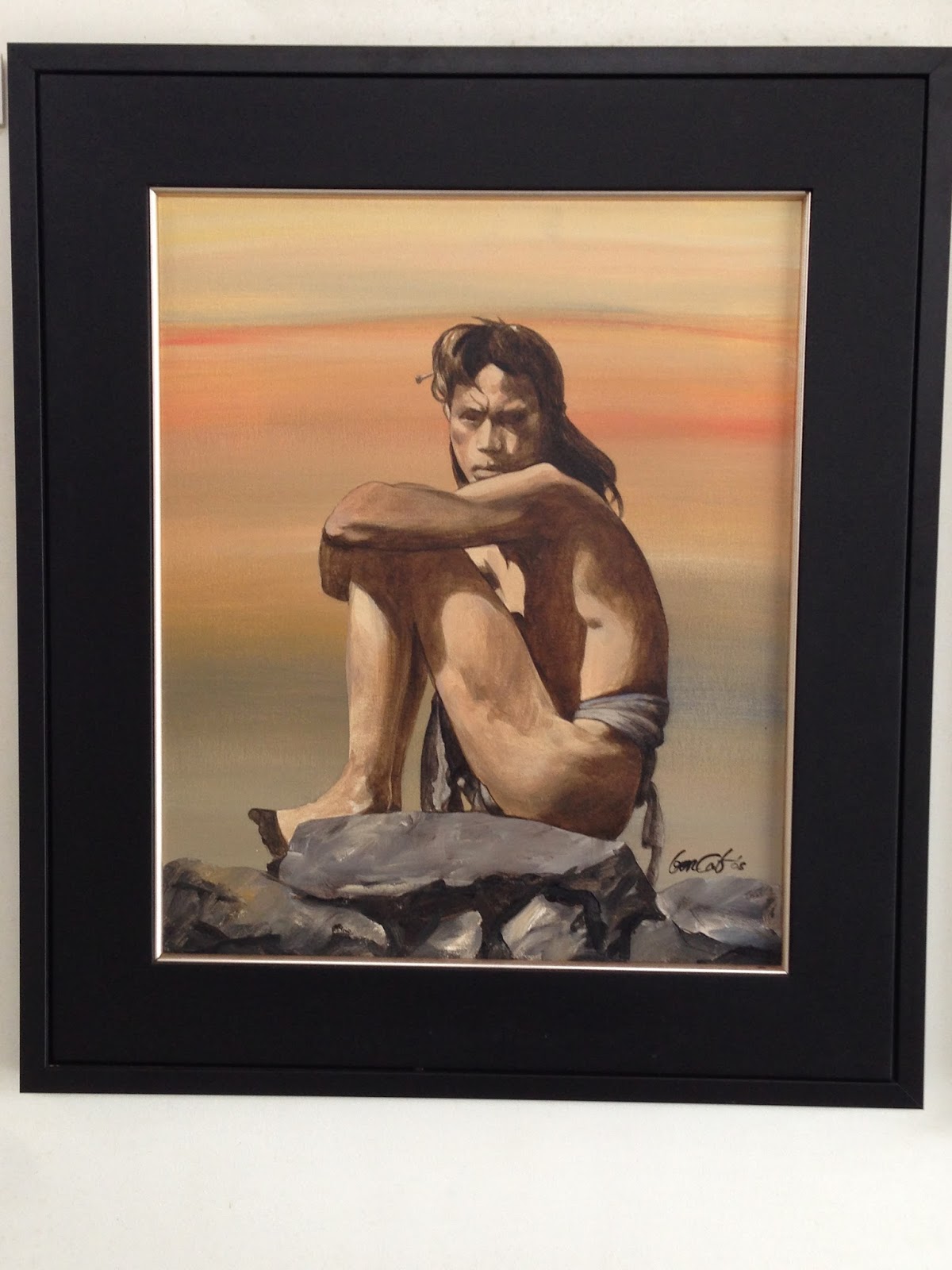 This reunion filled me with longing. They all bury their faces into each other.

The gallery also displays works of other artists. It had a 'masters exhibit' featuring national artists (Joya, Magsaysay-Ho stood out for me). And, I believe some up and coming artists as well. I managed to capture one was he was putting the finishing touches to his work. This brings to mind 'Attack of the Killer Tomatoes.' But this time, the fruits are the victims. (Which they really are?) 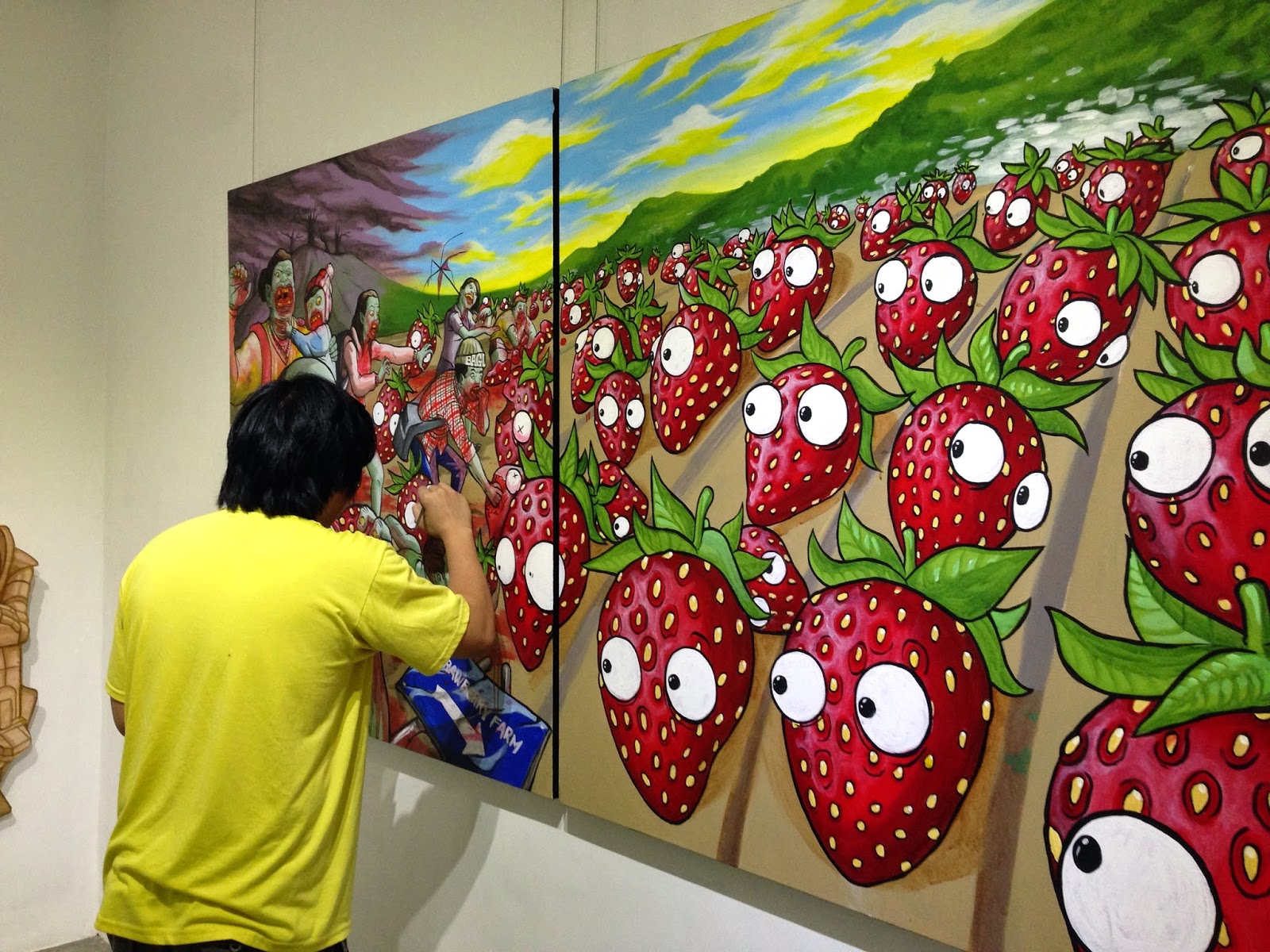 That brief visit made me want to indulge my eyes in more art. I'll ask c3 to accompany and do some gallery/museum hopping soon.


Posted using BlogPress from my iPad
Posted by closet case at 5:13 PM 6 comments:

The PLU Catholic: What next?

Sorry for the delayed follow-up to the posts. Life got in the way. LOL But now that I have some me-time, I'll continue percolating this idea. I received a few responses to the query, all encouraging.

I wrote my friend-priest about it. Even sent him the posts and the survey summary. He liked the idea and pretty much encouraged me to pursue it. He would have been perfect as the spiritual director or guide of the group. But he is based abroad. And he was quite unsure whether he could actually lend his time for it. As he explained it, he enjoyed our personal conversations about matters of faith, because we were friends. He felt comfortable expressing his 'viewpoints'. But 'leading' a group of PLU's is another matter for him. He wouldn't know how his superiors would react if they found out. He suggested looking for other religious who may be so inclined. Maybe not even priests but laity who may be sufficiently 'trained'.

I guess I have to look for that person if I want to pursue this. I'll keep you posted.

Uhmm you know of anybody?


- Posted using BlogPress from my iPad

Posted by closet case at 9:57 PM No comments: