I just learned this highfalutin term recently from PhD student-friend. A fancy term for those into buying Branded stuff (with a capital B) or Luxe.

The term kept running circles in my head as I watched Sex and The City (and will continue on with Devil Wears Prada). For the most part, Carrie and the girls consumed fashion with passion. The dresses, bags and, of course, the shoes were all designer labels. It was just so lovely to look at. These are one of the times I wished I was a lady, so I could indulge in couture.

It just ain’t the same for a man, methinks. Sure there are all those brands pour homme too but face it, the cuts and the styles are extremely limited. You can’t be too fashion-forward, especially at my age. So a shirt is a shirt is a shirt whether by designer or not. Yeah , I can turn to bags. But monogrammed messenger bags or even duffels are not my thing either.

But beyond fashion there are many other pricey items I have started to appreciate.

There’s bone china or dinnerware. In my mind there was only Noritake and its exquisite sets. I finally found a classic set, 136-pc for 12 but from a Korean manufacturer Hankook. I discovered that bone china stands out from ordinary porcelain because of its luminescence. And Hankook supplied the sets used in Buckingham , the Vatican even Malacanan!

That was followed by crystal stemware. Turns out that the properties of crystal (lead glass) allows it to be thinner than glass. And that makes it more desirable when looking at wine. I loved the shape of the Diva line of Schott Zwiesel so I decided on the Bordeaux Goblet, the White Wine and the Sparkling Wine sets. The water goblets I got from Crate and Barrel.

Then there is the flatware (used to be silverware). This was harder to find as I had a particular design in mind , to match the dinnerware. I found the Tramontina brand with the 18/10 (Chromium Nickel alloy) stainless steel (they don’t use silver as this tarnishes). This alloy has the highest polish finish and superior rust resistance.

I made these investments last year. Yes , investments as there is (supposedly) an after-sales market for these items. I was initially hesitant to use them. But this year , with all the health issues of my folks , I decided to use them for everyday. I wanted all of us to experience having meals in these really beautiful dining pieces. 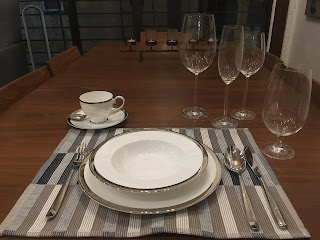 - Posted using BlogPress from my iPad
Posted by closet case at 7:58 AM No comments:

J is a Grindr-based therapist. But he was referred to me by another masahe-junky friend of mine. I checked him out on FB and found him really cute. My friend didnt find his jewels ..uhm... ‘exciting’ enough but the massage was legit. I eventually got in touch with him and booked the massage.

His FB photos sadly were previous shots before an acne ‘infestation’. I was quite disappointed at first and puzzled. But you could tell that under the pimple landscape was a very cute face. So I proceeded with the massage and found it pleasant. No formal training as I recall. But he said he was trained by his ‘hilot’ grandmother.

His body was toned and actually sexy. He had this nice round butt. And he was a bit shorter than me and that made it perfect. His hagod had an electricity to it especially when he made me sit. He was massaging my shoulders and arms from behind. It felt so intimate. I was getting aroused. But he didn’t make any overt moves to deliberately stimulate me. So there was no happy ending then.

He was also very nice and even amusing to talk to. And coupled with that ‘hagod’ I knew I was going to try it again.

Around two weeks after, I got him again. And this time, something happened. I thought he wasn’t the type to give head but he did. And that endeared him to me Hahaha. He quickly became a regular therapist.

He was the ideal masahista in a lot of ways. He was really cute despite the breakout. He was sexy and of the right height for me. He was friendly and funny. He enjoyed the happy endings so much that these became happy beginnings instead. And he would allow me to move in from behind. ;-)

But we had a falling out after a few months. It turned me off that it seemed like he could turn to me when he needed some extra cash. Hindi ako atm. It was regrettable. I was almost done with searching for The Masahista.

I guess no matter how nice they all start out to be , they would still look at you as this ready-cash machine. And that just zaps the fun out.

Posted by closet case at 9:08 PM No comments:

Only because it is the day before New Year’s Eve. And It’s Rizal Day.

So indulge me as I look back at 2018 as cheesy as this may sound. Top 5 Highs and lows of the year in no particular order:

I loved that trip with c3. It is a lovely place quiet and so honeymooney. I got my sunset and plenty of drinking. I was in the best shape and probably my best torso pic ever. But the peak was my surprise dinner-for-two on our last night to celebrate 5 years. I had it arranged on the boardwalk part of the shore with torches to light up the area.

I thought it would already be spring by March. But blame climate change and I still got my share of snowstorms. And one was on the day I was watching Hamilton on Broadway. Trains going back to Jersey were cancelled. But I managed to go home. Proud to have watched that and Dear Evan Hansen and Lea’s Once On An Island.

It was my 2nd trip to NZ. Mainly to visit my bro and his family in their new place. This time was really meant for bonding with them. But they took me to Hobbiton and Lake Taupo. That was lovely.

4. Health Issues of people I love

Tatay complained of hearing problems in the early part of the year. Nanay was brought to ER for extreme vertigo (and I accompanied her in the makeshift ambulance) around mid-year. Then c3 developed vision problems that forced him to take an extended break. Then Tatay didnt seem to be responding to his prostate CA hormone therapy anymore (by Q4). That deteriorated to some anxiety. My dear fag hag fainted on the street and she turned out to have had a mini-stroke. By mid-December Tatay was in the hospital for pneumonia.

Finally we are ending 2018 at 100% and it feels really great. I can hold my head up high at least for this first part of 2019. And because of that I allowed myself to be part of the big corporate celebration at the yearend celebration. Though I was a wreck leading up to that I turned in a decent performance in front of the the owners top management and probably 5K people. I am only as good as my last performance so I am savoring this while it lasts.

2018 was a mixed bag of surprises. I remain grateful and optimistic.

Posted by closet case at 7:43 PM No comments:

Father and his gay son

its almost 10pm. Im at the hospital, companion to my father who is confined for some gastrointestinal upset. The decline in his health has been steep for the past two months, as his prostate CA seems to determined to assert itself.

Timing is not the best. I have just wrapped up one of my most toxic year-ends. On top of usual sales catch ups and meetings, I had to accept a performance at the big, corporate Xmas party. It was a major, major production, with budgets in the tens of millions. I didn’t realize the pressure until rehearsals started.

I suddenly felt so amateurish. I was singing with pros, and with a band conducted by the brother of Ms Broadway star herself. I was being scolded by the director for my missteps. I was panicking. I was so afraid of so many things: forgetting lyrics, not reaching the high notes, missing my cues.

All on top of running a business, chasing the numbers, dealing with people issues, and of course, attending a hundred and one Xmas parties. I almost broke down or got sick. My regular was in susani - suspended animation, i.e. no Workouts!

But when it was all over yesterday, i felt sooo relieved.i started eating and drinking as my pat on the back. i was so determined NOT to do anything today.

Then I woke up to news about dad’s condition and the need to be confined. Honestly, I felt anger and frustration. Why now? What did I do to deserve this? And I knew I was transparent, even to my dad. I felt so guilty but I couldn’t control how I felt.

Ultimately, I volunteered to accompany him, from admission to sleeping over. When I was alone with him in the room, anger just dissipated. Well, it turned into self-pity for a while. But that quickly passed.

For the first time, too, I did what I never thought I’d ever be able to do - wash him after he moved his bowels.(he was just too weak to do it himself.) All the eww and ick didn’t happen. I was methodical and unemotional. Even with the odor and all.

He kept on apologizing. I told him he should stop. Of all people, he deserved to be taken cared of. He is entitled to it. He can be as difficult as he wants with me because he earned it. He gave decades of his life to us, to me,to get me to this place and time. No, he doesn’t need to apologize.

I failed to tell him that I should do the apologizing. For even daring to think for a moment of my selfish need to relax on top of taking care of him. I am deeply ashamed.


- Posted using BlogPress from my iPad