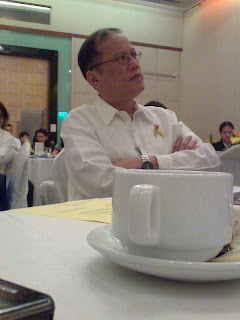 sharing a table with a presidentiable, exchanging small talk, i got a close-up view of sen noy noy aquino. my impressions: he is no traditional politician. he definitely did not 'work the crowd' the way trapos usually do. he did his bit of hand-shaking, but it all seemed like he was still uncomfortable. honest and sincere. his track record: fiscalizer, putting corruption under control. he admits to ignorance, pledges to listen and learn. despite the receding hairline, there is youthfulness. definitely he has brains. he talks deliberately though he could go on and on.

i was one of those skeptical when he finally declared his presidency bid. but this brief encounter with the senator has made me take a more serious look at him as a serious contender, without having to consider his impeccable bloodline.
Posted by closet case at 2:46 PM

exactly. i like that he is unassuming. i do hope he grows more comfortable speaking his mind.

He did say he was thinking of giving up Hacienda Luisita. Now that he's running for Prez.

i saw him give a speech not long ago (no notes). he is shy for a politician but he knows and understands a lot of issues. and the honesty shows through.

my understanding: kris and boy abunda are spearheading this 'make-over' for him. i just fear they might go overboard. im suddenly optimistic about how this election will turn out.

ARgh! Now that Loren is running with Manny, I'll go with Noynoy. I like Villar coz he's pro-poor. (Pro-poor folks usually bankrupt countries coz they're blind to economic realities. I want us to default like Argentina and have hyper-inflation like Zimbabwe lol).

Anyone but Loren! That opportunistic dumb bitch...